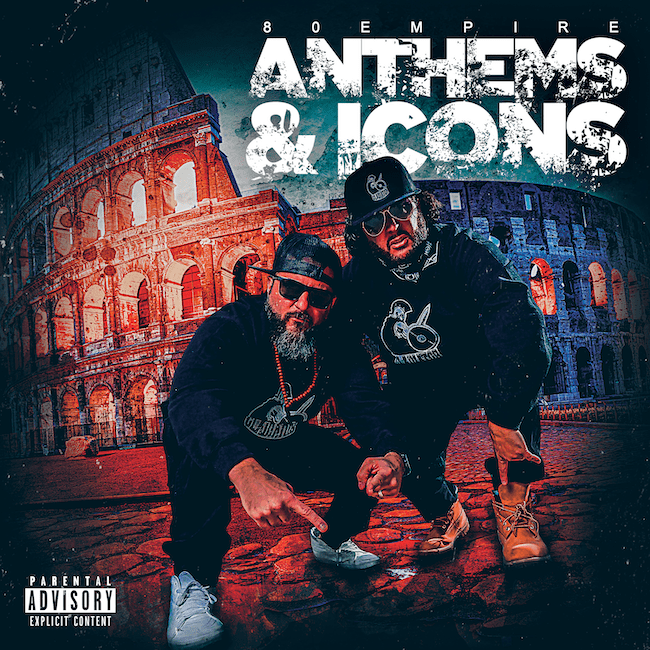 When it comes to real Hip Hop ambassadors and a crew bringing legendary names together in a complete project, let’s began by saying 80 Empire is a problem with their new project “Anthem & Icons” featuring legends like KRS-One, Kurupt, MC Eiht, Slaine, WC, Layzie Bone, KXNG Crooked, and more. Coming out the Niagara region in Canada, originally from Toronto, these brothers are stand outs in this independent scene. Being that we are living in a post-pandemic environment, the world definitely needed a refreshing project like this to remind us that real Hip Hop is still alive.

Consisting of 17-tracks, and A&R’d by one of most reputable dot connectors in the business, M80, and distributed by the iconic FatBeats record label it’s no surprise that “Anthem & Icons” will leave a strong impact in Hip Hop for decades to come and will be known as one of those classic records. As we do with all ur reviews, we highlight a few songs, and it’s up to ya’ll to dig into the project. Let’s start with the intro “We Run Shit”, which will hit Hip Hop heads in the face when pressing play, we haven’t heard KRS-One get off like that in a while. 80 Empire soon after “Walk with the Giants” with their production with Dogg Pound‘s Kurupt and MC Eiht bringing out the best out of both emcees. We also noticed other heavyweight collabs with Gorrilla Nems in “Bravo” and Grafh on “In the Beggening”, two of the most consistant newer wave emcees in the game. Nems is currently under everybody’s radar with the “Bing Bong” movement he’s created virally on the internet.

“Anthem & Icons” is the 4th project from the duo in 2021, and definitely looking forward for what they will come with for 2022. 80 Empire obviously are known for working with some of the best in the game, and thus we conclude that their opportunities in making an impressionable mark in Hip Hop is undeniable as certified OGs in the game.