Apokalips The Archangel releases his new 19 track album titled “1137Q” after his Queens zip code. Produced by his label partner Seasra23.The album begins with an introduction highlighting the Jackson Heights Queens and its rich Latin cultural atmosphere.  I was able to consume this album while driving through the city, it gives me a Nastradamus vibe with golden age content.

Track 1 was a rebellious sounding record with raw gritty vibes  ,the content was completely underground revolutionary you can hear the distress in the artist voice as the album advances. Track 2 “Soul Caliber” had an infectious sample as the hook carried the song through. Apokalips came with a lyrical witty verse I digged his stylistic approach & sound resonance.

“Dangerous Mind” was a stand out track feat Godfather Pt 3. & Dj Modesty The flow kept an red laser eye smooth every verse fell into each other. The Dj scratches is a lost element in todays hiphop and leaving the door open to highlight the Dj was magical.

“Underground” started with a classic sample introduction just to end up creating a classic production as Apokilips glide over this instrumental to make my favorite song on the album thus far. You can hear the Queens influence all over his flow sounding like all the greats we know and love. If I had to compare to any new upcoming artist I would say Dave east and remembrance of Big L. 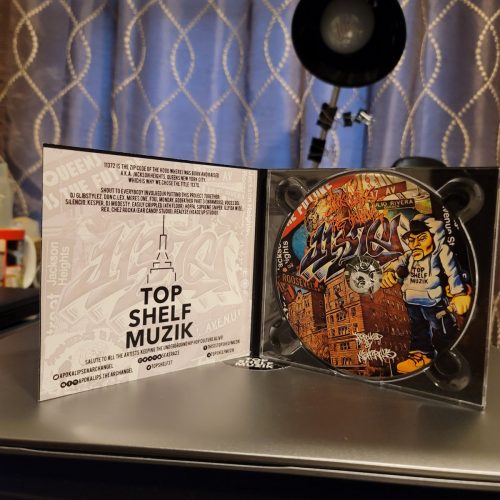 Amigos feat Lex and Kesper, The 1st thing I noticed was the production quality and vibe of the track. I can imagine a integration music video of some sort but in your face visuals would bring this to life. “Ghetto Souveuniers” feat the legendary artist Godfather Pt 3 for another collaboration. This time the song was more more so conceptual  and highlighting bars and intellectual thought. Queens tribute by letting it be known they side with Ether over Jay Z catalog anyday.

“Agression” Featuring Supreme Sniper and Lex with scratches from Dj Glibstylez. They mixed in all the legends in a hook sampling artist from Nas to Method man. The impact factor from a Hiphop perspective this record is heavy bar song like Most of the songs from these collaborations. “Stay Strong” Feat D-Rex & Illy Da Wize gave me a immortal technique Necro type vibe. The deep raspy tone carries over with a ghastly push.

“Never Count me out” is a reflective record full of introspection. The song structure is signature at this point as we know what to expect. now that im towards the end of the album I stay true to my 1st statement of this album reminding me of Queens Legends LP “Nastradamus”. Its only right you have a Queens legend in God Father Pt 3 feat and stamp it for approval. For more music by Apokalips The Arch Angel follow him on social media and Spotify.