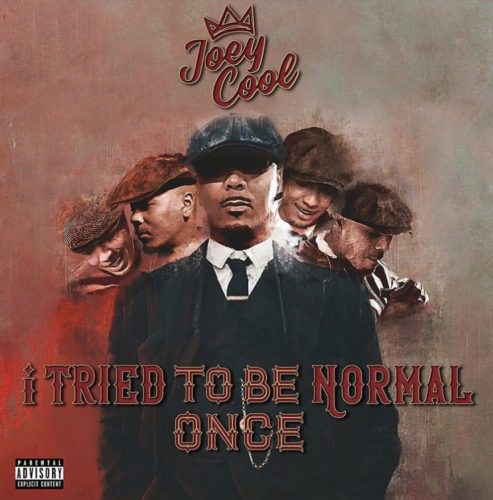 Joey Cool is a 35 year old MC from Kansas City, Missouri who first caught attention as a long-time affiliate of local independent hip hop powerhouse Strange Music. However after releasing a total of 4 mixtapes & a studio album on his own, Tech N9ne decided to officially sign him to the Snake & Bat in 2017 & dropping his eponymous sophomore effort the next year. This was followed up with Old Habits Die Hard & now as the 1-year anniversary of Coolie High approaches this fall, Joey is following it up by dropping his 5th full-length album.

After the “Swanktastical” intro, the first song “Way Down” works in a pillowy trap beat asking to dim the lights whereas “Jumpin’” is an energetic crowd mover down the Kato production. “Strange Sinatra” declares himself as such on top of a glossy trap instrumental from Dominique Sanders just before going into rap rock territory for the Tech N9ne-assisted “Man on Fire”.

Meanwhile on “Protect Thine Energy”, we have Joey going back into trap turf talking about dominating every season leading into him & Kye Colors jumping on top of some pianos & finger snaps showing their new bag for “New Phone”. He later opens up about a party in the hills that’ll probably kill him on the quasi-boom bappy “Bad Dreams”, but then “Like I’m Supposed To” atmospherically opens up about never following suit & being him.

Jon Connor of all people tags along for the jingly “Thomas Shelby” comparing themselves to the Peaky Blinders character of the same name whereas “Don’t Touch Me” has a more minimal sound saying he’s not down with the fuckery. C-Mob, Rittz, Suli4Q & Whitney Peyton come together on the trap banger “It’s a Pity” saying they did it now while “Here We Are” is a moodier jam about how “we take it far”.

The penultimate track “Whiskey of the Day” with Jehry Robinson & Wrekonize finds the trio joining forces to deliver a catchy homage to Jack Daniels down to the stripped-back production & the closer “Coolie Time” is a just yet hyper dedication to Red Rocks Amphitheatre, which is where his Strange Music contract was publicly revealed at.

Now I don’t know where Joey Cool is going from here because we all know a lot of artists have been leaving Strange to do their own thing throughout these last few months, but I’m gonna stick along for the ride because this is as solid as his previous efforts. I love the confidence in his voice & even though Seven usually produces the label’s output, they make it work without him.