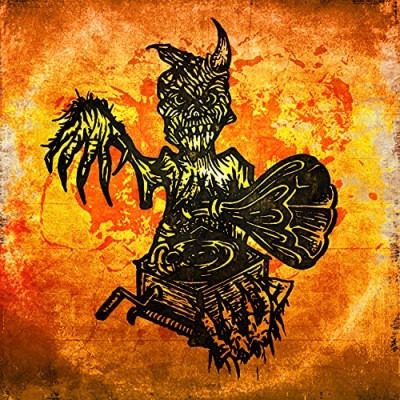 Majik Ninja Entertainment is a Detroit based independent record label founded by Twiztid & their manager George Vlahakis in 2014, only 2 years after the demented duo’s departure from Psychopathic Records. However, they quickly built an empire or their own from bringing a few other PSY alumni along for the ride to help introduce G-Mo Skee & Alla Xul Elu to a much wider audience. The label’s first showcase comp Year of the Sword is easily the best one they’ve put out so far given the strength of the roster at the time, but that’s not to say Songs of Samhain wasn’t a respectable Halloween-themed EP. They just dropped an exclusive label comp at this year’s Attack of the Ninjas couple months ago & now with Halloween approaching this weekend, the crew is back together for a sequel to Songs of Samhain.

After the “I Shall Arrive” intro, the first song “Needle on the Record” by Twiztid is a demented boom bap opener about the haunted record player possessing their souls when they turn it on whereas “Go Out” by Blaze Ya Dead Homie, Boondox, Gibby Stites & Jamie Madrox takes a turn into rap rock territory spitting that hardcore shit. “Haunted Thoughts” by the House of Krazees heinously spills out the fucked up shit in their minds just before Blaze, Boondox & Jamie reunite for the slow yet victorious ballad “Sing It”.

Meanwhile on “Heavier Every Time”, we have the Venomous 5 reforming over an unsettling trap beat about how the world will never understand them leading right into the “Nursery Rhyme from a Different Time” interlude. The song “Paint the Town Red” sees HOK keeping it in trap turf getting murderous while the penultimate track “Halloween Treat” by Twiztid & Oh! The Horror is a rap rock cut displaying some goth romance poetry. The album ends with “Quarantine”, where V5 plead to be saved from the disease of living over some pianos & dusty drums.

Compared to the first Songs of Samhain & even the Attack of the Ninjas album, Songs of Samhain 2: Haunted Record Player to me is the best label comp MNE has put out since Year of the Sword. It sounds darker & I really admire that it’s a bit more conceptual than the predecessor did.