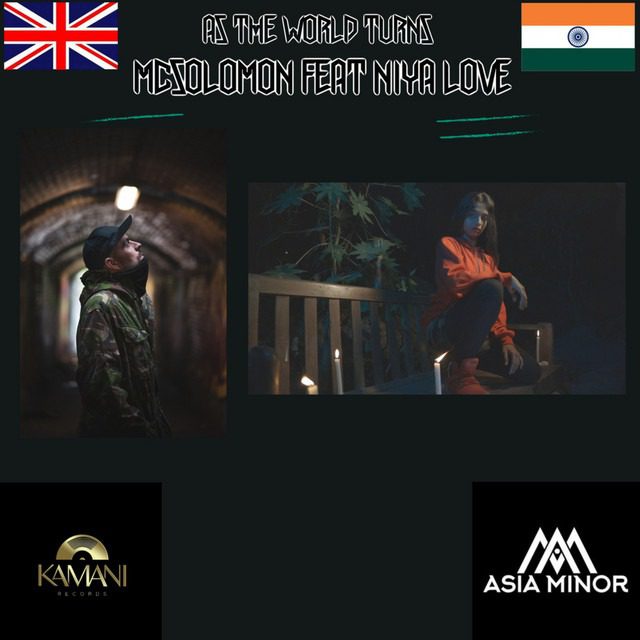 UK and India collide on this thought-provoking and revealing collaboration titled “AS THE WORLD TURNS” between emcee MC Solomon and Niya Love. The duo shares their thoughts and concerns on the mainstream narratives around the Corona Virus over a dark hard-hitting backdrop produced by Asia Minor. MC Solomon leads the charge with an unapologetic approach while exploring the craziness surrounding the lockdown a sit affects citizens in the UK and across the globe. Niya Love follows suit with her smooth flow in the Hindi language sharing her own frustrations with the way people are handling the situation.

The video is a blend of performance shots and images taken from news clips around the country. It has a dark and moody aesthetic that really adds a certain urgency to the gripping record.  “AS THE WORLD TURNS” is the first single to be taken from MC Solomon’s upcoming album Behind The Mask which is out 22nd February 2022 via Kamani Records. The album also features fellow rappers 5:55 and Shaikhspeare.

About Niya Love: Niya Love is a rising star of the Indian hip hop scene who exploded into view when her track ‘BADLA V’ hit over 3 Million views on YouTube, gaining the newcomer worldwide attention. She raps in Hindi and pens hard-hitting real-life stories in her bars.

About MC Solomon: MC Solomon is a hip hop artist and CEO of Kamani Records. Spending his time between the UK and Goa in India Kamani’s ethos is to showcase the thriving rap culture of India to a world market through a series of global collabs and releases. As an artist, MC Solomon has performed at festivals across the UK and Europe including Glastonbury and has shared stages with the likes of Skinnyman, Akala, Lowkey, Immortal Technique and Mic Righteous. His previous track ‘Bombay to London Ft. Shaikhspeare’ gained a Track Of The Week slot on Bobby Friction’s BBC Asian Network. He has independently organised live Hip Hop events and music workshops for youths in southeast Asia with the Assembly Of Creative Arts, Beat Box Without Borders and Most Wanted Records India. He is also one of the lead organizers of Goa Hop Festival in India.