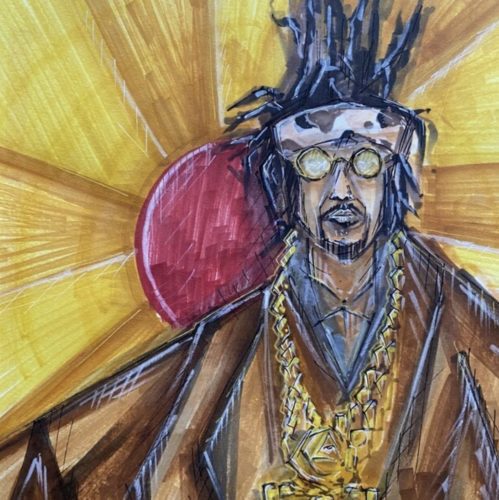 This is the 39th EP from from Atlanta emcee/producer Tha God Fahim. Coming up as an affiliate of Griselda Records alongside Mach-Hommy & Your Old Droog, he’s also built up an incredibly vast discography with a couple of standouts being Breaking Through tha Van Allen Belts & Dump Assassins. Now the last time I covered Fahim’s work was when he dropped his 19th full-length album 6 Ring Champ & the final installment of the Shot Clock King trilogy of EPs produced by Nicholas Craven shortly after last spring, but is reuniting with Griselda in-house producer Camoflauge Monk to drop Dark Shogunn Assassin following the NicoJP-produced Chess Moves only a few days prior.

“Gristle” is a jazzy boom bap opener with Fahim rapping about how the dumpin’ won’t stop until he says as well as bringing the pain similar to that of Method Man & asking who the boogeyman of this rap shit really is. Estee Nack of the Tragic Allies also happens to pop up during the 2nd half of the song to lay down the EP’s only guest verse & he absolutely obliterates it, raising my expectations for Nacksaw Jim Duggan even higher than it already was when Westside Gunn announced it on Twitter a month ago already. The penultimate track “Sword n Shields” blends some kicks & snares with these low-register synthesizers so he can treat his pen like a blade moonwalking over MCs as if the late King of Pop himself Michael Jackson came back from the dead & advising that you can lead a horse to the pond, but can’t make them drink. “Never Back Down” finishes it all off on a more mellow note with Fahim talking about being up for any challenge that’s brought to him & coming up from the struggle.

Blvk Pearl, it’s sequel, Iron Monkey, Iron Monkey: Dump Olympics & Only God Can Judge Me are all essential Fahim projects in my book so my expectations going into this EP were significantly higher than Chess Pieces as a result of that. Needless to say, they did it again with Dark Shogunn Assassin. Yeah it’s only 3 tracks running at 9 minutes, but don’t let that scare you from thinking that Camoflauge Monk’s raw production & Fahim’s elevated lyricism make it more than worth your while because they really never miss whenever they join forces.