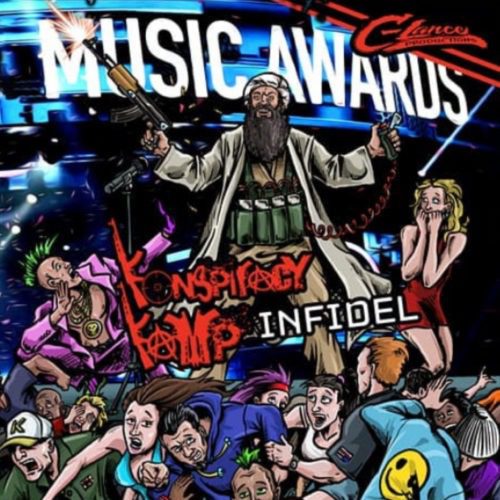 The Konspiracy Kamp are a quintet from Kalamazoo, Michigan consisting of Checkmait, Drama Treason, J Cutlass, Shneal & Young Ghost. The group has gone on to release 4 full-length albums & an EP throughout the 7 years they’ve been together but for the 20 year anniversary of 9/11, they’re enlisting Boston veteran C-Lance to produce a 7-track EP in it’s entirety.

“TV & Jesus” hypnotically kicks the EP off by telling us the 2 things that America really needs whereas “Neck Cutter” goes into boom bap territory getting bloodthirsty. 9th Prince tags along for the Middle Eastern-tinged “Blood on the Hand” proclaiming themselves as rebels. The titular song has a more trap vibe calling for unity just before “Regicide” heinously calls to kill all the kings. The penultimate track “Loud Ass Mouth” is a boom bap banger about how they’re always talking shit, but then the closer “Heretic” works in some snares & a guitar talking about how people wanna burn them.

I’ve been following these guys for a few years now & coming away from Infidel, I was not disappointed by it whatsoever. The raw production of their previous efforts is taken to a whole new level as is their conscious lyricism & even the way all the members bounce off one another.