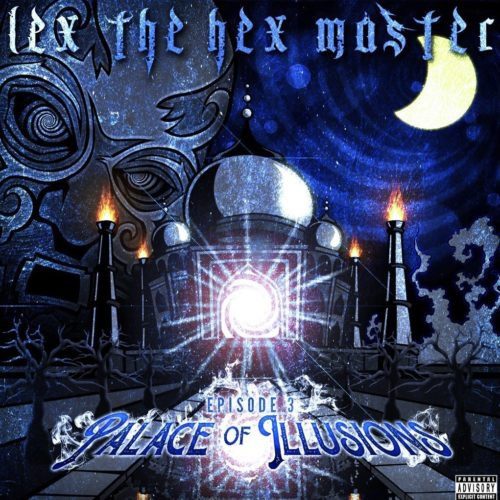 Lex the Hex Master is a 37 year old MC from Queens, New York who broke out in 2015 with his independent debut album Born in Hell. The demented Detroit hip hop duo Twiztid would sign him to their label Majik Ninja Entertainment shortly after & he has put out a plethora of releases since including The Black Season, Contact, the Mr. Ugly duology, Beyond Redemption, Shadow King, Strictly 4 My N.I.N.J.A.S., Party Castle & Haunted Mansion. But after laying low for a good portion of the year so far, Lex is returning with his 4th EP.

After the intro, the first song “Dream State of Mine” kicks off the EP with an acoustic trap banger talking about making them bow down whereas the C.G.-produced “Get Sippy” with Gibby Stites & Skullz has a bit of a more West Coast feel instrumentally talking about turning up. “Thriller” mixes together some dusty drums & synthesizers saying he can’t disappear until they know his name just before “Real One” almost has a bit of a Latin trap influence to Poetic Beats’ production letting listeners know who you’re rocking with.

The song “Closed Minds” with Jamie Madrox finds the 2 going into boom bap territory firing back at those who’re quick to dismiss their talents while the penultimate track “Main Squeeze” takes a more futuristic route in terms of sound talking to his potential ride or die bitch. “Highway to Heartbreak” then closes out the EP with a passionate piano ballad talking coming a long way & still being here today.

We’ve waited a little over a year for this 3rd installment in a 4-part series of EPs & I’d say it’s a solid comeback for Lex. The production in comparison to his past material is probably the most diverse it’s ever been, his lyricism is as cutthroat as always & there’s no denying that he took his time with this one. Very excited to hear how the series will end hopefully next year.