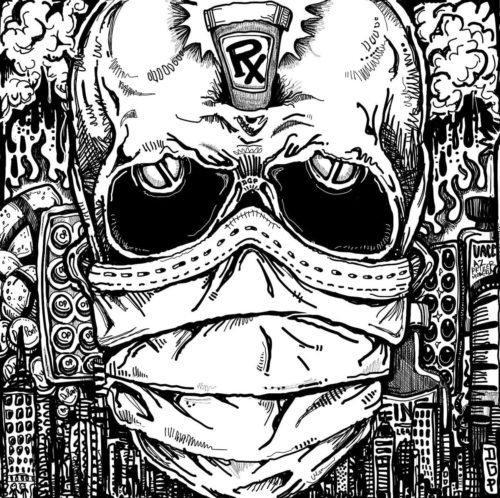 This is the brand new collaborative album from Rasheed Chappell & XP the Marxman, the latter hailing from Los Angeles & the other coming straight outta New York. Both of them have been putting it down for a while in the underground by dropping acclaimed projects like Keep Firing or Sinners & Saints, but I don’t think they’ve ever worked with each other prior to RX so my interest was definitely there going into it given how much I enjoy their solo works.

“Congregate” kicks off the whole thing off with a downtrodden Reckonize Real instrumental reminding everybody they’re from the real whereas the Illwerd-assisted “Hefty Loc” goes into the boom bap direction talking about being the last ones left. Oran Juice II tags along for the drumless “Water to Wine” getting on their kingpin shit just before “Ganji” has a more dustier feel to the production celebrating their lifestyles.

Meanwhile on “Coke Pirouette”, we have Rasheed & XP extravagantly talking about how it seems like the game has changed leading into the tensioning “Mahogany Chips” speaks on being engineered from real life. “Orale” wickedly details the lives that they idolize, but then “Here” with Tim Hall incorporates some jazz influences remembering where they came from.

Jay Royale comes into the picture for the Roc Marciano-produced “Toss the Metal” spitting that fly gangsta shit while the song “Sinful Saints” finds Buckwild working in a soul loop looking back on the choices they made to live so well. The penultimate track “Reminders” works in some solemn horns talking about the days they used to slang dope & “Save a Spot” finishes the album on a more optimistic note by saying they won’t let Satan take their souls as well as trying to vibrate higher.

If anyone reading this is a fan of either one of these guys or both, then you’re really gonna dig what they bring to the table on RX. It’s cool to hear how well both MCs ping off each other detailing the hardships they both had to face from the respective coasts they grew up in with the production being rooted in that traditional old school sound we all know & love.