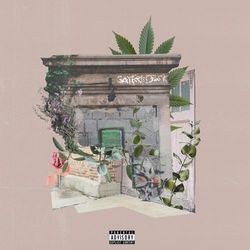 Tha Joint is the rap duo made up of Joey Golden and Jonathan UniteUs and their new single “H.A.MF” gives listeners a glimpse into one of their favorite past times. With the global pandemic and political unrest, the duo shows listeners how they unwind amidst the craziness in the world. It could be by blacking out to one’s favorite song or relaxing with their favorite strain of smoke. The duo make good use of the laidback and hazy backdrop to deliver their candid thoughts on the natural herb that helps calm them down.

Both Joey and JohnNY, from the New York City collective O.I.S.D., have a combined 15 projects (solo & collab) between 2012 – 2018 with their last and only collaborative effort back in 2014 (re-release in 2015), “The Operation” with Ross Munroe. Tha Joint takes on a new direction to redefine and solidify the balance in styles between the two artists, now working as a unit. 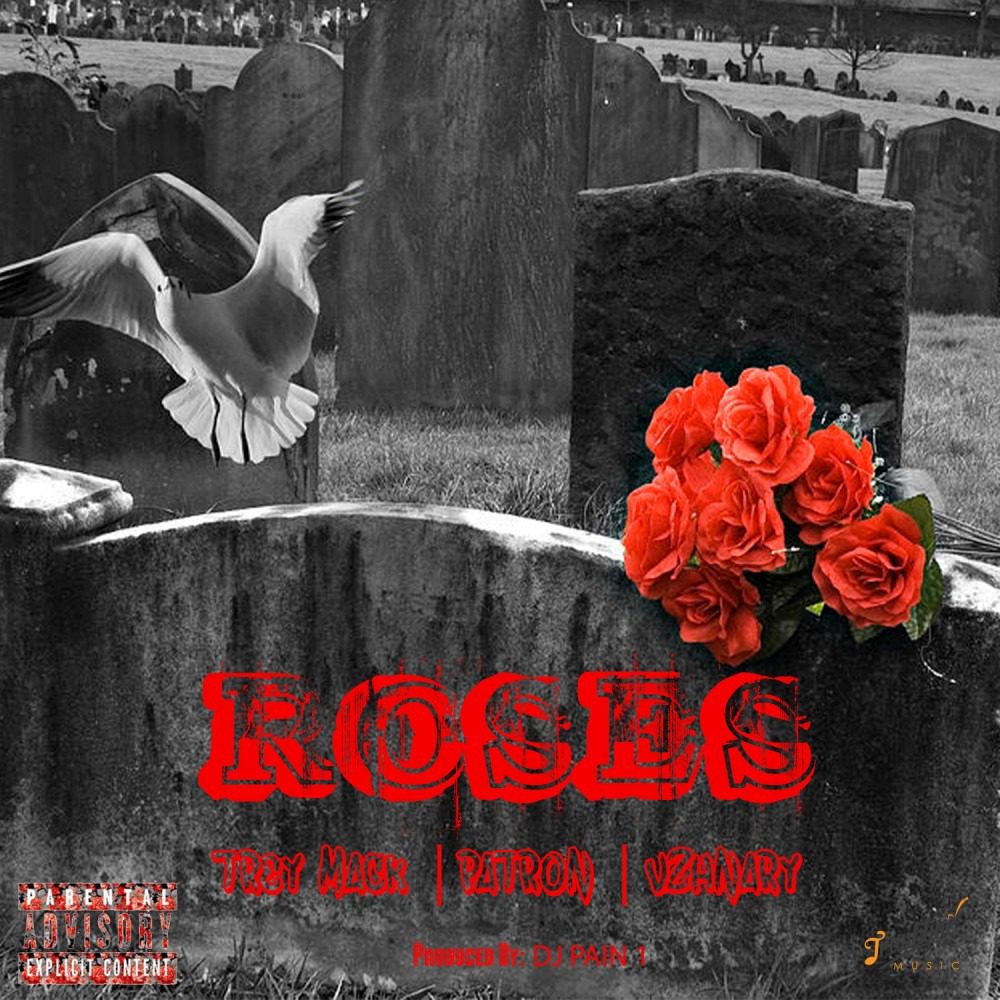 The trio of Vzhnary , Patrón, and Trey Mack have joined forces to bring this heartfelt and insightful single “Roses – “Music Connoisseurs” to our site. The production here is lush and crisp with it’s r&b textures and punchy drums that blend perfectly with the vivid and honest rap verses and a memorable hook to tie it all together. 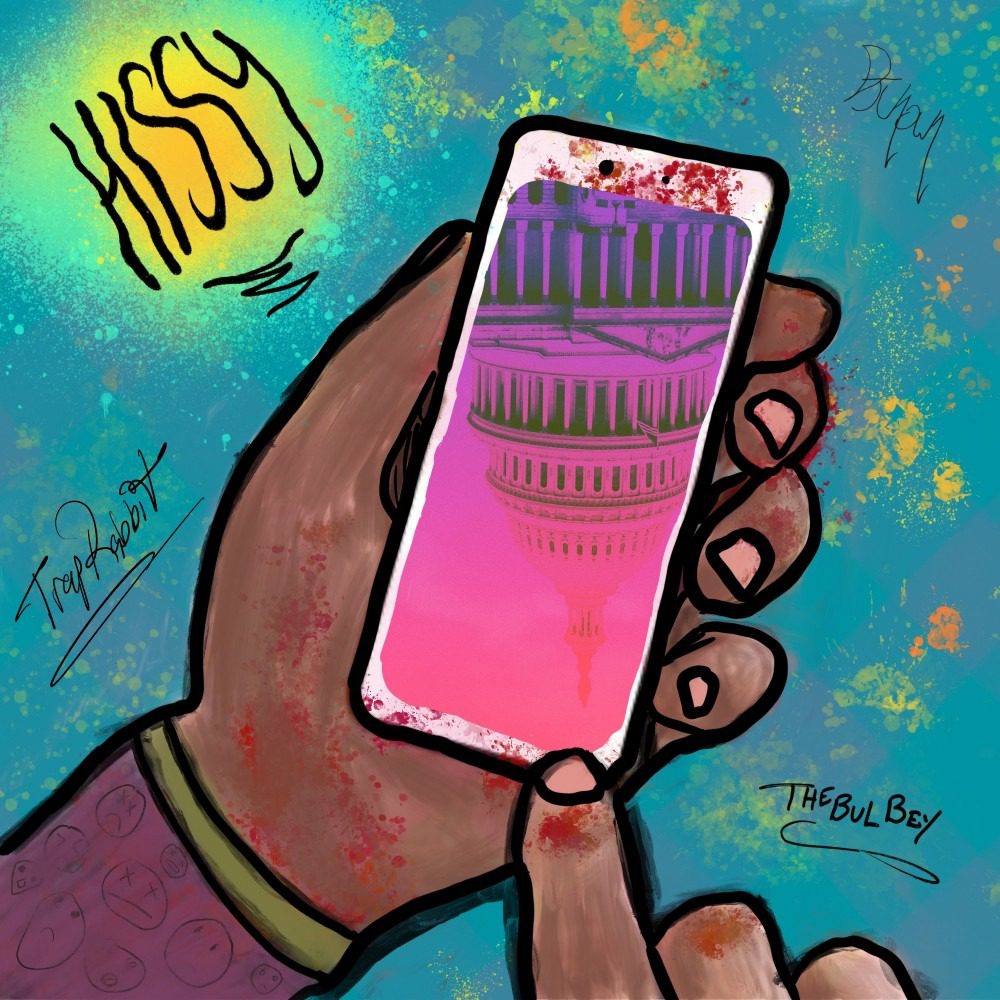 Philly production duo Trap Rabbit, producer Unown, and fellow Philly MC The Bul Bey have formed an alliance to bring us this lively punchy track titled “Hissy.” The track which was birthed a day after the failed capitol storming by armed groups dives into real-time issues ranging from racism, inequality, and more. The backdrop which has a punchy electro-soul vibe was crafted from a live beat making set by DJ Unown and Trap Rabbit and forms the foundation of the track itself.

Trap Rabbit is a collective of Philadelphia and New York-based musicians that produces music referencing a menagerie of influences including piano trios, indie songwriters, psychedelic rock, experimental hip-hop, and niche 70’s funk and soul from around the world. Founded in a basement on the outskirts of Philadelphia in 2015, its members include studio rats, touring session players, ivy-league snobs, conservatory grads, high school drop-outs, DIY legends, pop junkies, jazz enthusiasts, and hip-hop aficionados. Their achievements are similarly varied, including international tours, academic awards, and collaborations with Grammy-winners and platinum record holders.

Get “Hissy” on all DSPs here. 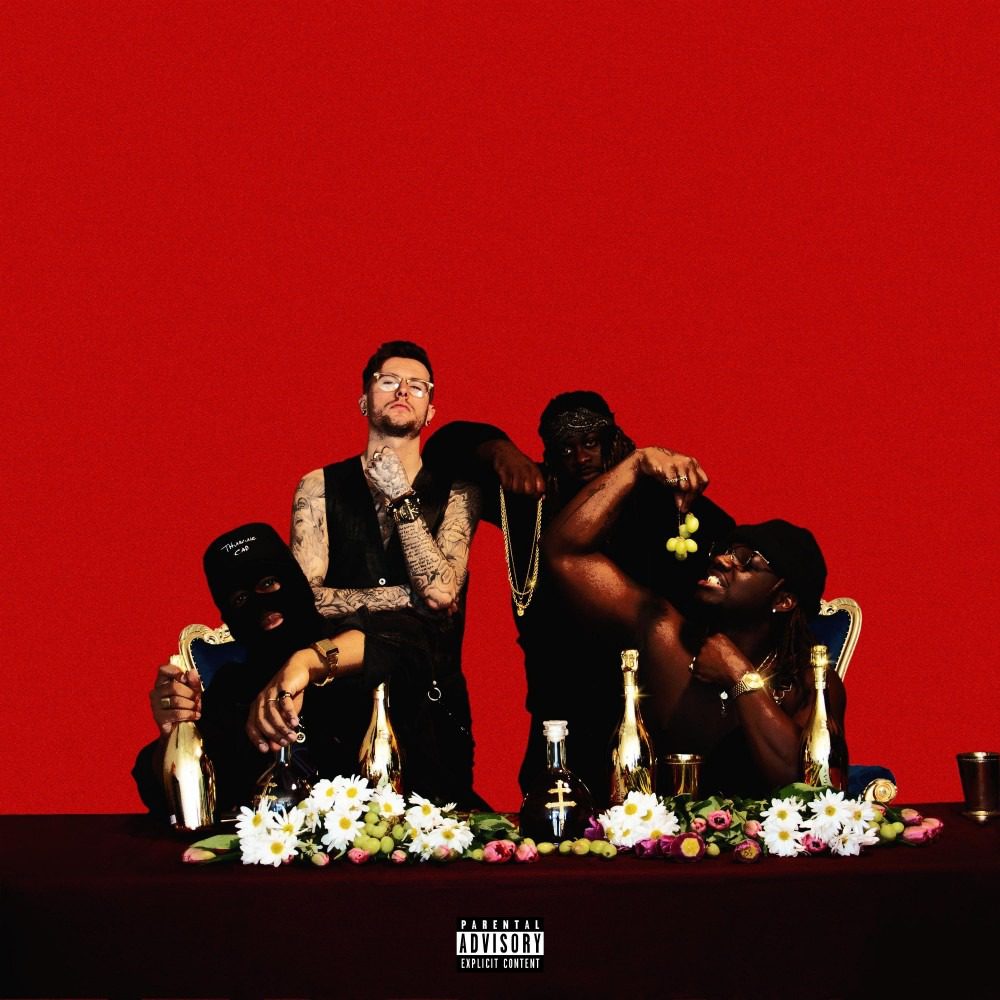 STAYOUTLATE is a 4-member alternative hip-hop collective from Canada who got our attention with their latest release titled Fabergé.  The 9 track body of work is a snapshot of the group’s common vices including sex, drugs, money and partying. It’s far from glorying these things but rather gives listeners a clear and balanced depiction of the lifestyle the best way they possibly can. The group made up of Tremayne, Scotty IV, Charlie Noiir and YoungWolf operate from a higher plateau with their wine or bubbly soaked melodic flows, lush atmospheric trap backdrops, and penchant for vivid lyricism and painting luxurious lifestyles that many wish to attain.

From the dark trippy opening track “Strings” to the upbeat bright vibes of “Open” or the ethereal sounds of “Body Roll” the crew breaks down the dynamics of attaining a certain level of notoriety in this social media age. The internet can make it all fancy and rosy but real life is far from perfect and the work that goes into making it can be detrimental on different levels. The project also showcases their unique versatility as they infuse different sounds and genres as shown on the dancehall/experimental sounds of “Bodmon Vibes” and the R&B/atmopsheirc “Baddieville.”

The sounds for the most part are consistent courtesy of YoungWolf and Zepfire while the lyrical images were painted by Tremayne, Charlie Noiir, and Scotty IV.

The name STAYOUTLATE was created by Scotty IV and his Manager Jei Parks, based on Scotty’s first single by the same name that put the collective on the map. The first iteration of the group was formed in 2014 with founding members Tremayne and Scotty IV as artists and Jei Parks and Erkz as managers. The group’s message strongly revolves around the idea of a rose that grew from concrete. the range of each artist is what sets STAYOUTLATE apart from other groups. Between the melodies and delivery of Charlie Noiir and Scotty IV, the alternative hip hop appeal of Tremayne and YoungWolfs roots in EDM, STAYOUTLATE truly has something for everyone. with their fast-growing buzz in North America and a budding fan base in Europe this collective’s stars will surely continue to brighten. 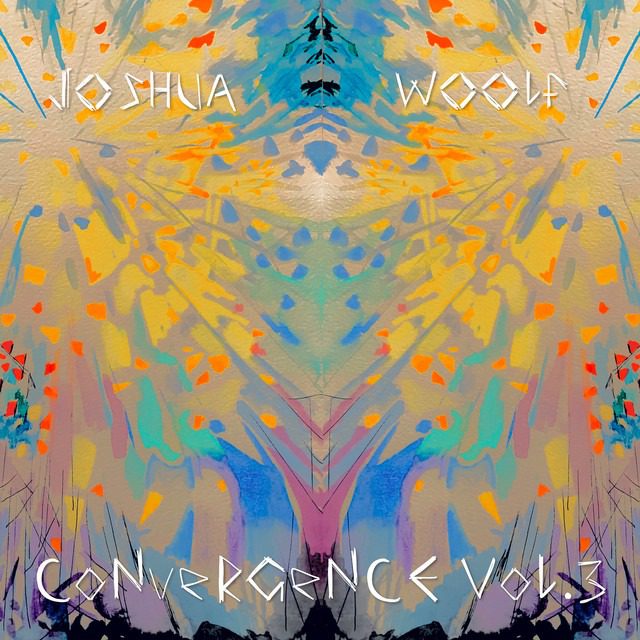 The triple threat of musician, composer, and producer wastes no time unleashing the track’s driving force of horns and intense bass. The guitar also adds to the invigorating vibe.  “Aquarian” is ideal for amplifying one’s creative juices and is primed for a seasoned lyricist to flow over. Woolf assures Hip Hop heads around the world will head-nod through the streets, to the b-ball court, at rooftop sessions, or solo…simply vibing out.

Stream “Aquarian” and connect with Joshua Woolf below.

Rome Streetz & Futurewave debut the new single “Bible or the Rifle” ahead of their upcoming album Razor’s Edge dropping next Friday. 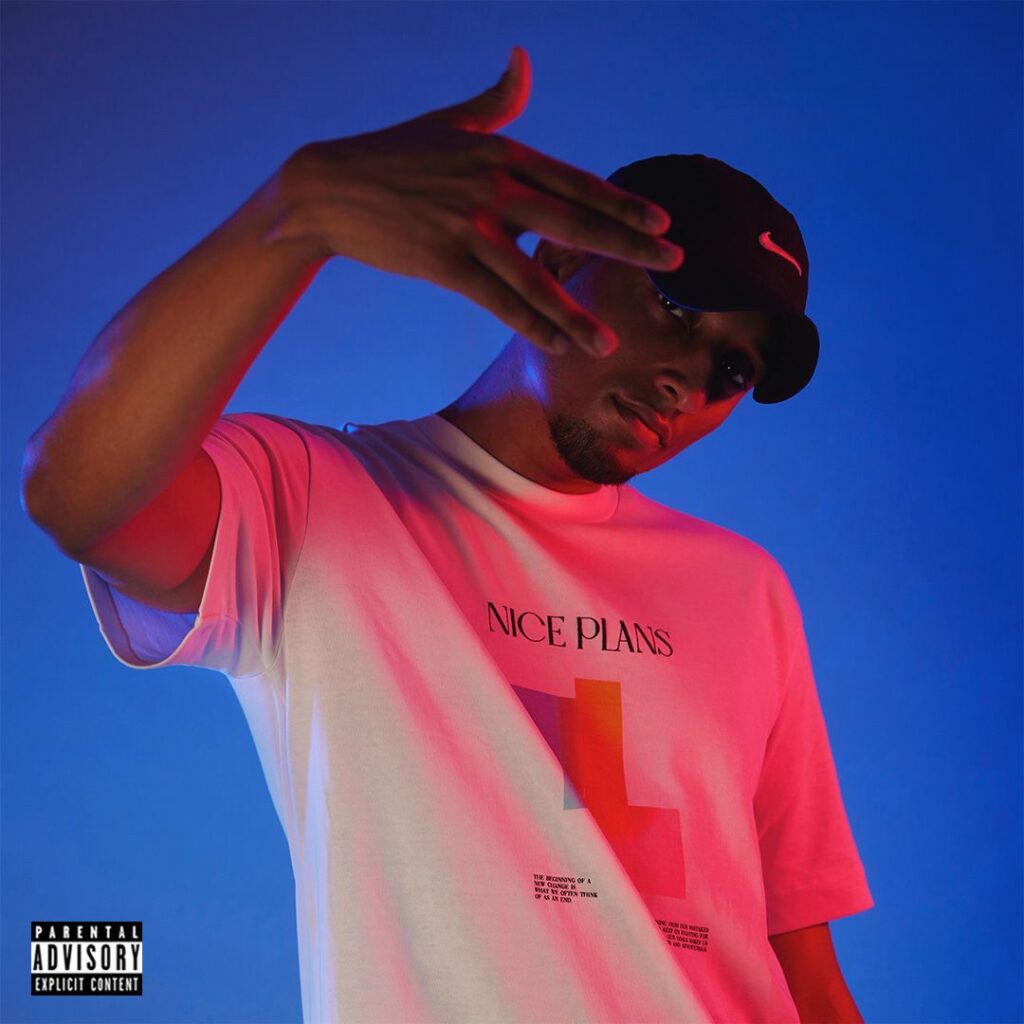 Emerging emcee Ehmji displays his verbal prowess on his new release titled “Beam Me Up” where he employs a vibrant double-time flow in an effortless manner. The title is a nod to the popular Star Trek phrase which has regained a resurgence in recent times. The track is punchy and has a pop-like synth that blends with the crunchy drum grooves and pulsating basslines.. 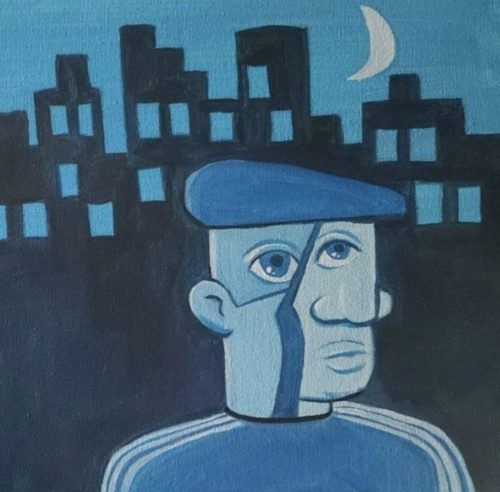 This is the long-awaited debut EP from Detroit emcee B-Side. Most notable for being 1/2 of the duo Sidenotes, the man wouldn’t branch off until the release of his debut mixtape The Vertigo 1.5 in the summer of 2013. This was followed up the next year with A Side Called B & then B-Side Wins Again at the tail end of 2018. However, it’s been all leading up to The Essence right here.

“20 Million” kicks things off with a dusty boom bap instrumental from Foul Mouth & the amount B-Side wants until he retires whereas “Mission Statement” takes things into soul/electro turf with the help of Black Bethoven telling you to consider this as such. “Supply & Demand” is a bluesy Sidenotes reunion as if they never left leading into the almost jazzy & vivid story of the “Invisible Man”.

Been a long time coming, but I’m glad this day has finally come because you’re hearing B-Side at his best throughout The Essence. Dude’s pen-game is witty & I dig how he sticks to that vintage hip hop sound. 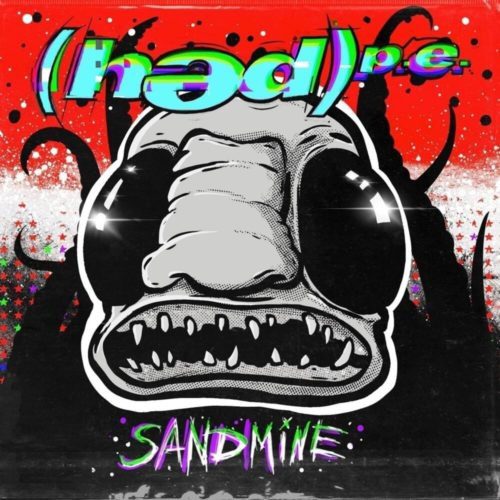 This is the 6th EP from renown Huntington Beach g-punk outfit (həd) p.e., which has always been masterminded by Jahred Gomes despite it’s revolving door of members throughout the 27 years they’ve been together. Standouts in the crew’s discography include their self-titled debut, Broke, Back 2 Base X, Insomnia, New World Orphans, Truth Rising & even their previous album Class of 2020 that came out the day before Broke’s 20 year anniversary last summer. It was originally intended to be the group’s last effort for a while but due to the COVID-19 pandemic as well as the 2020 presidential election & the birth of Jahred’s daughter, (həd) p.e. is channeling all of their inspiration from all 3 of those events into Sandmine with the help of Suburban Noize Records backing it.

The title track is a thrashy opener quenching for blood whereas “False Prophets” serves as a punky jab at Donald Trump. The song “R.T.R. (Respect The Republic)” goes into rap rock territory talking about rebellion while the penultimate track “Deathtrip” is a skate punk joint with Jahred talking about risking his life. Finally there’s “Let Me Know”, which is a reggae rock cut trying to figure out what’s on his lovers’ mind.

Class of 2020 was a great throwback to (həd) p.e.’s roots & Sandmine is just as great to me personally. Once again, they’re taking it back to the basics except Jahred & company sound a lot more pissed off than they did when we last heard them 11 months prior.

Madchild is a 45 year old MC from Vancouver, Canada coming up as part of the trio Swollen Members & the founder of Battle Axe Records, but would be until 2012 when he officially broke off solo with his Suburban Noize Records-backed debut album Dope Sick. He would later go on a hot streak of follow-ups including Lawnmower Man, Silver Tongue Devil, the Evidence-produced The Darkest Hour & Demons. But even though he went into a more trap direction on The Little Monster LP last winter, the results of that stylistic change weren’t all that interesting & the sequel he dropped back in the spring The Little Monster LP 2 were slightly better. Nonetheless, I was still very much interested in seeing what Madchild would pull off this double disc 8th full-length album of his.

“Alone” starts off the album with a downcast ballad produced by Jimmy Donn venting about never feeling so lonesome whereas “Boxed In” is a trap cut saying he feels brand new. “MVP” goes into boom bap territory with the help of C-Lance going on about how he “ain’t putting any food on anybody’s plate unless they’re on my team” before declaring himself as an alpha male on the vibraphone heavy “Suck It”.

Meanwhile with “Lone Wolf”, we get a Hellish ode to the 1 Man Gang movement just before jumping on top of a comatose trap beat saying he’s “Underrated”. Of course “Not in Control” addresses his past drug use on top of a post-&-pans instrumental whereas “Mental Hellth” is SLATHERED in auto-tune talking about being the Devil’s play-thing. “God’s Child” works in a symphony saying he was failing the higher power while “Evolved” goes back into that trap sound saying he’s a changed man.

The song “Why I’m Mad” is a misty warning saying you shouldn’t fall for bullshit while the penultimate track “Forgiveness” is a piano ballad apologizing to everyone he’s hurt. Finally there’s “Cojones”, which is an almost electronic-tinged closer talking about swimming with the sharks & dancing with the wolves.

Madchild been grinding hard all year & it’s really been paying off because I think this is a solid effort from him. Dude really takes you through how much he’s bettered himself in the last couple years & the production choices have improved also. I know he said Shane 2 is coming soon & I’m curious to hear where that goes.