Struggle Mike , owner of Stuggle Clothing, from  Buffalo New York releases a compilation album featuring multiple local indie artists who have cross paths with him and his business called “Progress”. The dystopia style cover art was intriguing from my 1st glance, I was excited to pill the plastic back (Figure of speech) and digest the album fully. The Introduction was chilling, it starts with a reporter explaining the current state of the world and how its effecting  Mexico during Covid Pandemic . What I love about albums who display real worldly settings is it now becomes part of the fans listening timeline.

The 1st track on the album is titled “Loyalty” Feat China Mac, Rick Hyde, GoToMar$, The production sets up the push lines as you get a boombap Hip-Hop vibe. You can appreciate the quality sound as it begins to grow on you. China Mac Coming off a 2020 album called “Viral” adding to his growing catalog.
The album continues with “Like Me” featuring the legend himself Beanie Sigel, Speedie Da Icon & Stretchdotcom.
The gritty raw vibe was perfect for Beanie as he gave his his classic persona setting the tone for this track. The delivery begins to become mono as the song goes on the downside, I would have like to hear more rawness with this collaboration with Beanie Sigel. Another stand out tack along the way was “Teach” Feat Rick Hyde, Stalley & Smoke Bulga. It begins with a Malcolm X clip talking about the importance of protecting yourself.
This has to be my favorite song so far as sonically it resonates. I love the substance behind the record even the difference in style by each artist giving it more life and dimensions. Stalley comes hard as usual with all bars showing why he is still tops in the underground. The Title is on point as it does exactly that with out being overly preachy. “Out The Frame” By Speedie Da Icon also caught my ear as it reminded me of a late great ODB. The aggressive style brought out the irrelevant sounding production. No hook just bars all the way through I got the visual of a mad scientist just letting off bombs. 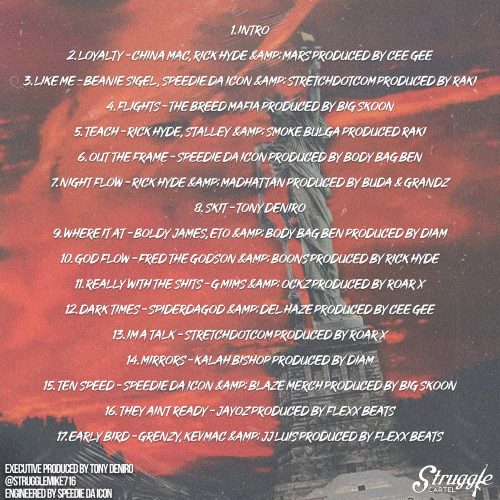 “God Flow” Feat Fred Godson & Boons is just that as Godson sets the tone with a lyrical nuclear. We defiantly miss the the late rapper and glad to have gems like this to discover on the way. I spoke to soon as “God flow is now my fav on the album so far. I can see a Magical video for this highlighting the transition of Fred the Godson would be highly interesting.
“Dark Times” was gruesome with a  lyrical onslaught feat Spidergod & Del Haze . We are familiar with works from Del Haze as this is another tally for a highly consistent artist. The sonic wave is video worthy as it automaticlly buts visuals in your psyche.“Mirrors” was magically I loved the hook and verses by Kalah Bishop she mad it believable and rockable. I can see this song in film and tv very introspective and reflective. If there was one thing I can see potential in is her delivery it will enhance over time and she will be a dangerous artist.
Rate 8.5 out of 10