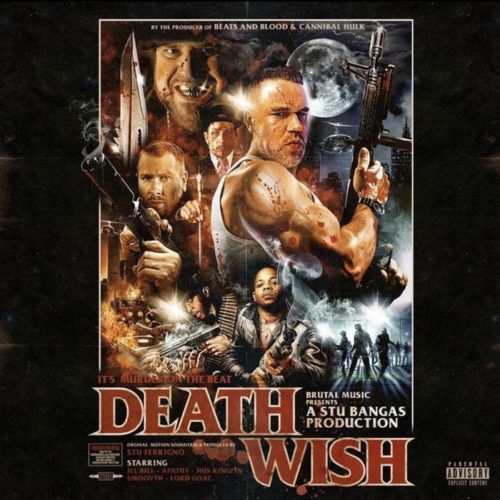 This is the full-length solo debut from Boston producer Stu Bangas. For the last 15 years, the dude has become a household name in the underground realm by giving beats to an ever-growing list of veterans ranging from members of the Army of the Pharaohs collective to the late Sean Price. But since 2019, he’s been steadily grinding his ass off producing projects for the likes of Ill Bill & Recognize Ali. He just dropped the conceptual Empires with Cypress Hill percussionist Eric Bobo back on 4/20 & is now branching out on his own once more in the form of Death Wish.

After the titular intro, the first song “So What You Wanna Do?” by the Heavy Metal Kings is a dramatic boom bap opener thirsting for blood whereas “Candy From a Baby” by Vangarde takes a happier note looking back when Mr. Lif’s mom gave him his 1st boombox. “Levitate” by Apathy lividly talks about defending the throne & after the titular interlude, “Skull Fucker” by Starvin’ B weaves in some grim pianos telling listeners to be glad he ain’t tapping their chins.

Meanwhile on “Come Correct”, we have Tha Connection forlornly spitting that dope slanger shit just before “Dead Body” by Lord Goat & Recognize Ali wickedly quenches for blood. “Brotherhood” is a serious Watson & Holmes reunion talking about getting right, but then “Same Spot” by Juga-Naut weaves in some keys speaking on not really advancing when you know the path.

The track “Outta My Way” by Snak the Ripper & Young Sin finds the 2 aggressively advising their opposition to walk away before it’s too late & before the titular outro, the final song “Fill the Cemetery” by Celph Titled & G-Mo Skee rounds out the album with endless wig-flipping punch you in the face bars & an apprehensive instrumental.

As much as I liked Beats & Blood, I’d have to say that he really stepped it up on Death Wish. His production is top notch as it usually is, but the list of MCs that he brings along for the ride is much more consistent in terms of their performances.