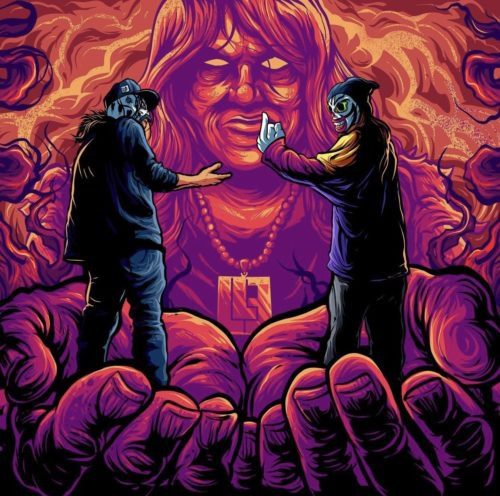 This is the 2nd EP from Ohio duo the Super Famous Fun Time Guys. Consisting of Mr. 8 Legz & Whipstick, they originally broke out in 2018 off their full-length debut Our Album & then the Super Dudes Crooning the Tunes EP where they freestyled over songs like Yasiin Bey’s Mathemathics” or even Earth, Wind & Fire’s “September”. Following their sophomore effort How Do You Fit a Cassette in a Discography? & their solo debut EPs, they became the very 1st act to sign to the almighty Alla Xul Elu’s independently owned Long Live Evil label & their 3rd album Don’t Hug Me from the Front quickly won a lot of people (including myself) over with how well it mixed horrorcore with comedy. But they’re coming fresh off a small handful of singles to celebrate Black Friday with Mom’s Not Mad, She’s Concerned.

After the “Not Another Intro” intro, the first song “Stuck” with Dent 1 is a boom bap/g-funk fusion paying tribute to their fans whereas “Crash & Burn” works in a piano talking about going down in flames with smiles on their faces. “Finder’s Keepers” takes a more mellow route telling the story of discovering a body on the side of the road, but then “Play Your Role” has some trap undertones getting on their wicked shit.

The song “Another Round” with Billy Obey returns into boom bap territory talking about going through the motions again & not knowing how to snap out of it while the penultimate track “Wittalittlebitta” is a bit oxymoronic with it’s summery production & speaking about painting the town red with dark clouds hanging above them. “Like Damn” then finishes the EP by melodically talking about locking their victims in the basement.

Not only does this EP remind me that these guys are quickly becoming one of my favorite duos in the underground right now, but it also goes to show that Long Live Evil is continuing to rebuild itself as what Psychopathic Records once was in their prime almost 2 decades ago. Legz & Whip continue to make themselves stick out with their own with the production choices continuing to level up.