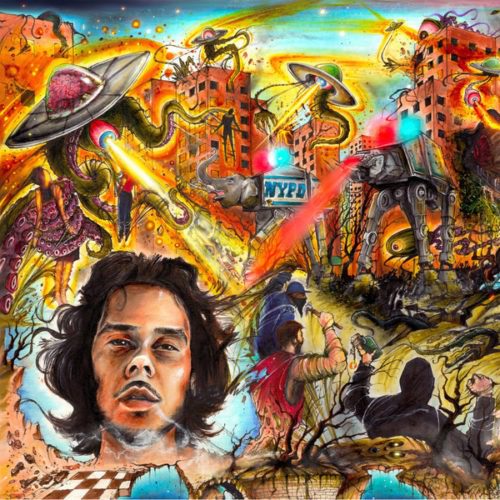 This is the 5th full-length album from Harlem emcee UFO Fev. Coming up in 2014 off his debut album Around My Way., it wasn’t until 2020 when he saw his biggest year yet by dropping not 1 but 3 well received projects: the Statik Selektah-produced sophomore effort Fresh Air along with the Termanology-produced debut EP From El Barrio, With Love & the Big Ghost Ltd.-produced 3rd album The Ghost of Albizu. Dude just dropped Magnum Opus last month & is already enlisting Vanderslice for the follow-up Enigma of Dalí.

After the titular intro, the first song “Crack Shifts” is an eerie boom bap opener with him & Flee Lord talking about that’s exactly what they be workin’ whereas “Moody Bass” has a more rich instrumental & Fev saying he’s gonna take this shit mainstream. Red Inf tags along for the mellow “Pack Flip” talking about a plan to wake up the masses just before advising to keep it off the speakerphone when talking money on “Home Team”, which has some amazing sampling throughout.

Meanwhile with “Artfully Done Street Shit”, we have Red Inf returning over a guitar & some dusty drums calling out those stealing the sauce leading into him saying he’s too far over the top on the dusty albeit piano-laced “Scroll Music”. The song “Jazz Criminals” with SmooVth fittingly has a jazzy beat with both of them getting mafioso while the penultimate track “Scarlett Letters” jumps on top of some violins to state that he’s painting like Salvador Dalí. Then there’s the closer “All That Glitters, where Fev & Sure Shot come together for a slick romance ballad.

Magnum Opus was cool, but I personally prefer Enigma of Dalí better. Vanderslice’s production is much more consistent than it was on Fev’s last album & the dude continues to reveal himself as one of the illest MCs in the New York underground right now.