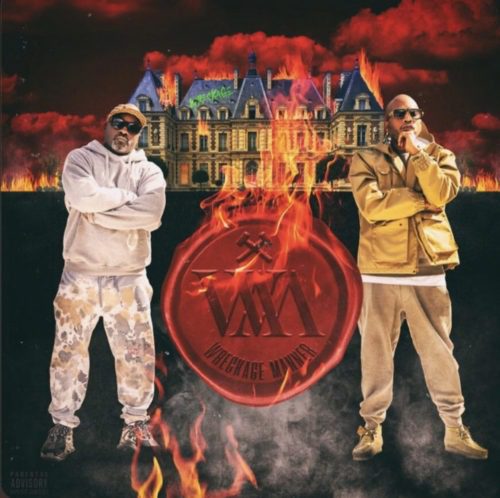 Wreckage Manner is a newly formed superduo from Queens, New York consisting of Styles P & Havoc. The latter most notable for formerly being 1/2 of the seminal Mobb Deep alongside the late Prodigy & the other coming up as 1/3 of The LOX with his childhood friends Jadakiss & Sheek Louch. Now we’ve heard these guys together a few times before on songs like on “Hard Life” off Filthy America…It’s Beautiful or the Billy Danze loosie “Chasin’ Money”, but was very much looking forward to their full-length debut over here given the impact both of them have on the culture.

“Fuck Around” is an amazingly eerie opener about how the duo don’t play no games whereas “Move How We Wanna” incorporates some heavenly background vocals saying they follow their own blueprint. The strings that “Fiend For” brings to the table are really cool talking about money, power & respect just before “Pay Me in Cash” does a good job of angrily demanding that paper over a dusty boom bap instrumental.

Meanwhile on “21 Gun Salute”, we have Wreckage Manner teaching the youth that keeping it real will get you further in life with the production enhancing a serious tone to it leading into “YO 2 QB” weaves in some more strings serving as a fresh homage to their neck of the woods. “Havoc & the Ghost” is a nice change of pace sonically talking about how they just wanna gross while the song “Good as Gold” calmly declares family over everything.

The penultimate track “Hymn to Him” has a dope lil guitar wailing in the background sending a warning to anyone who dares to cross them & finally, “Nightmares 2 Dreams” is a great sendoff to the album by grimly calling out cats who don’t understand them saying those people don’t even understand themselves.

Now if these guys are gonna make any more albums with each other down the road, then sign me the fuck up because this is a great debut. Havoc’s production remains unmatched & lyrically, he & Styles P sound really good with one another.