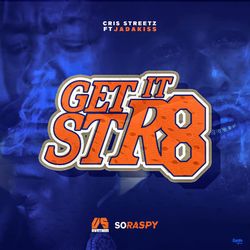 The Bronx-born, Tampa, FL raised Cris Streetz teams up with Yonkers representative Jadakiss for a solid hard-hitting collaboration titled “Get It Str8.” The track has a somber cinematic texture with crunchy trap drums that matches Streetz’s laidback gruff flow and intimidating lyrics. Jadakiss joins the fray with his distinct vocal style and vivid lyricism.

Get “Get It Str8” on Apple Music, Deezer, YouTube

Like hip-hop itself, Cris Streetz was born in The Bronx; but raised in Tampa, Florida. His upbringing influenced his musical style, creating a fusion of the two regional sounds. After spending a few years perfecting his craft with producer Noc, he released his first single “Ratched” at the close of 2016. The song created a buzz on East Coast radio stations. In 2017, he dropped his first EP, Pregame.

In 2018, his single “Hands Up” received spins at Hot 97, as well as praise from station heavies Ebro, Rosenberg and Funk Flex. The remix featured bars from Chris Rivers and Sheek Lounch from The Lox. He kept busy in 2018, releasing a series of follow-up hits including “All Week,” “Risks’ and “G’z Up,” all of which were included on curated playlists on Tidal, Spotify and Apple Music. His single “Hold Me Down” released that same year earned nearly 80K plays. In 2019, he signed to the imprint So Raspy, founded by his mentor Jadakiss. In 2020, he released singles “Big Leagues,” “Tell the Truth” and “Like Us.” In early October of 2020, he joined rapper Ninety on his “They Hate” which premiered on Bet Jams, and has become part of their rotation.