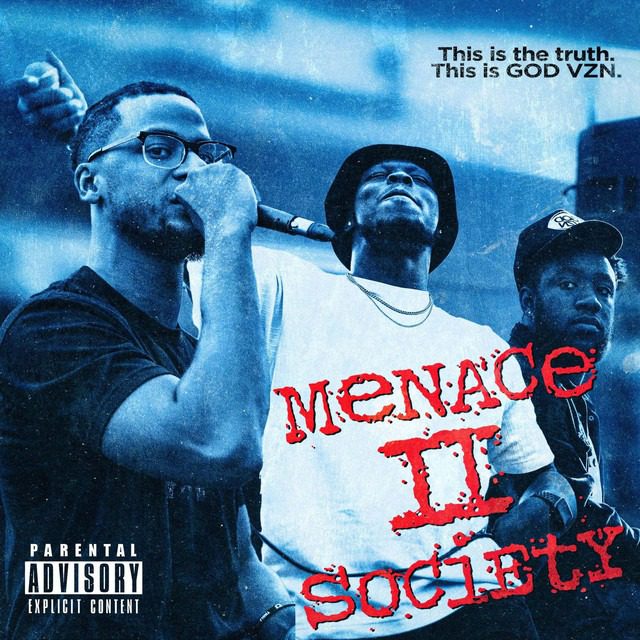 Washington, DC rap collective GOD VZN shares their debut track entitled “Menace II Society” which also comes with an accompanying visual. The collective made up of MoeSOS DC, Dre Wave$ and Ty Thom team up to deliver a lyric-dense piece that showcases their unique and distinct style over a punchy backdrop that flips Nina Simone‘s  “Feeling Good.”

MoeSOS DC kicks off the first verse and sets the tone with his smooth flow and Menace II Society reference, by stating “Caine ain’t left my city, baby’s hang on to sobriety.” Dre Wave$ follows up with his commanding vocal tone and shares his disdain for rappers “acting scary, getting hostile“. Ty Thom closes out the track by providing flows that are rhythmic but dance around the beat like no one else. Using this approach, Ty Thom draws attention to specific words and ideas he is expressing and amplifying. Most quotable, Ty Thom finishes his verse out by claiming “if Macklemore can win a grammy then I can get one too.”

MoeSOS DC is an emcee originally from Washington, DC who now resides along the coast of North Carolina. Growing from the influences of late 90s – early 00s Hip-Hop, SOS brings a vibrant sound to his music with lyricism geared at introspective reflection and social commentary. Taking influence from artists such as Jaden, Masego, and Lupe Fiasco, MoeSOS DC hopes to bring healing to himself and to his fans by building a community centered around truth through vulnerability and honesty. In 2017, MoeSOS DC dropped his first album entitled ‘SOS’ and has not slowed down since. MoeSOS DC has an array of singles, albums, and EPs available on all streaming platforms including his album ‘Silhouettes on Sunsets’ and ‘The Middle Man EP’. Since hitting the scene in 2017, MoeSOS DC has played 100+ live shows paired with a live band and some notable artists including 3OH!3, Footwerk, and Band of Tomorrow. MoeSOS DC hopes to reinvent what it means to give quality live hip hop performances through innovation of sound and technology. Be on the lookout for his next show!