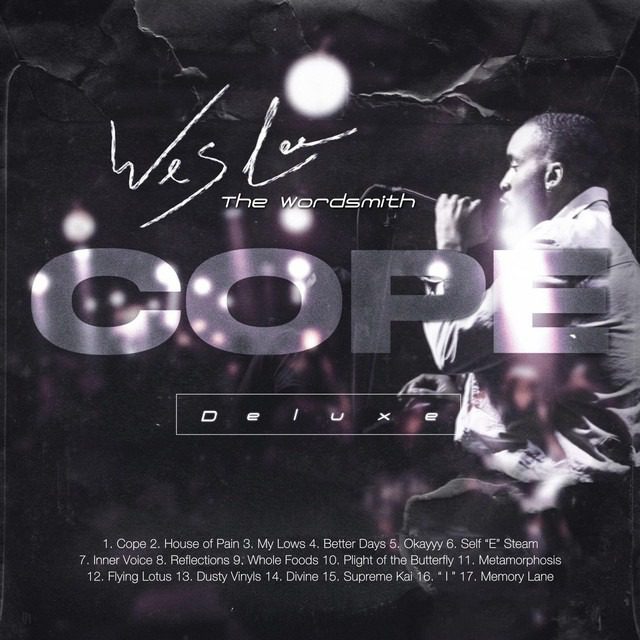 Rising emcee Wes Lee The Wordsmith has been deemed “The Poet who aims to bring the raw soul back into Hip-Hop” because of his vintage hip-hop sound mixed with his new era spoken word flow. On his new solo project titled Cope Deluxe, he delivers a wide variety of sounds and emotions over the span of 17 songs.

The project opens with “COPE” a spoken word introduction where he runs through his tribulations and struggles as a young black man and sets the tone of the project. This is followed by the somber “House of Pain” which dives into the rapper’s mind as he takes the listeners deep into what swirls in his head. On “Better Days” he delivers an uplifting and motivational track that implores listeners to look out for the better days. He makes use of a solemn piano-laden production to share his experiences and then some. He switches the energy on “Dusty Vinyls” where he delivers detailed bars over the bass-heavy boom-bap backdrop laid before him. On “Okayyy” he teams up with ExRealities for a blend of modern-day trap and classic 90s lyricism. The production here is atmospheric and bass-heavy while the verses are packed with relatable content that we all can grow on. Wes Lee takes time to reflect on his blessings on “Divine” where he uses real situations as inspiration. Other tracks that stand out include the nostalgia-inducing “Whole Foods,” the bright sounds of “Supreme Kai” which is an ode to his son.

Overall, the project is verbose and has a range of emotions and styles. Wes Lee The Wordsmith knows the assignment and gives listeners his true thoughts without sugar coasting anything.