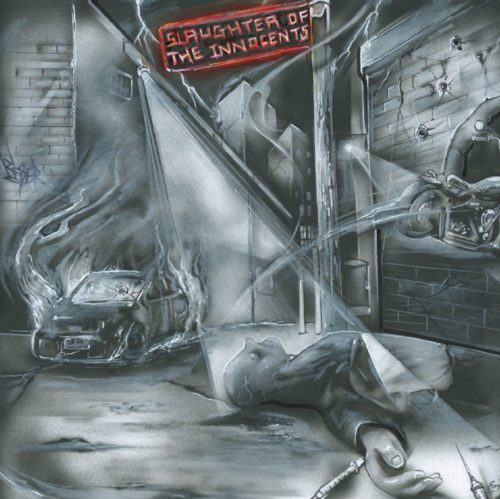 Big Left is a 47 year old MC from Queens, New York who broke out in 2002 off his debut EP Who’s Left?. This was followed up in 2007 with the debut mixtape World War III & then after his short tenure in La Coka Nostra, he finally unleashed his 1st full-length Walking Dead on Devil’s Night almost a decade ago at this point. But after coming out of a hiatus & signing to Force 5 Records, Left is making a comeback in the form of his sophomore album.

“The Reaper” starts it all off with some killer guitar riffs getting in his murderous bag whereas “Fuck ‘Em” with Aztek the Barfly weaves in some keyboards & dusty drums talking about not playing with the paper. “Flavor” is a violin-infused boom bap cut flexing his lyrical abilities just before the Tekk-assisted “Move Back” brings in some haunting organ harmonies talking about knocking motherfuckers out.

Meanwhile on “Pardon Me”, we have King Relik tagging along with Big Left for a thunderous party anthem just before “The Compendium” hauntingly expresses to be acknowledged as one of the greats when he’s gone. “1 Take” has a more vibrant trap sound to it rapping his ass off nonstop for 2 minutes, but then “50 Caliber Bangs” finds Napalm Drop linking up over a synth-heavy boom bap beat talking about staying underground.

The song “Force 5 Syndicate” is an anarchic Force 5 posse cut while the penultimate track “I Tried” melancholically opens up about him attempting to look inside himself. “Get It” with Masamoon then closes out the album on some beautifully ignorant, disrespectful shit.

Left’s been putting it down for the culture for a long time now & Slaughter of the Innocents really proves that he hasn’t lost a step. Hell, I think it’s the best thing he’s ever done! It’s well-produced, the guests are well-picked, he sounds completely rejuvenated & destroys mics like he never took time off.