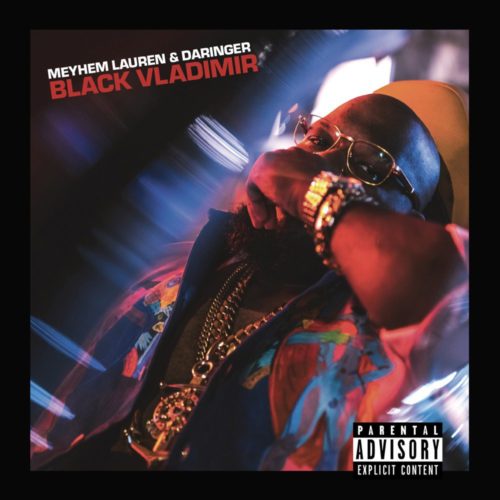 This it the 5th full-length album from Queens emcee Meyhem Lauren. Coming up as the leader of the Smart Crew graffiti team. He eventually started rapping in the mid-2000s, it wouldn’t be until the 2010s decade that he saw success. Most notably with Mandatory Brunch Meetings, the Buckwild produced Silk Pyramids, Piatto D’oro & of course the DJ Muggs produced Gems from the Equinox. Last we heard from him was Juneteenth 2020 when he dropped the Harry Fraud-produced Glass 2 & is now enlisting Daringer for Black Vladimir.

“Black Pinot” opens up the album with some dusty drums & plinky keys as Meyhem & Action Bronsoncharismatically flexing how smooth they both are whereas “Broken Rubberbands” keeps the piano boom bap vibes going talking about moving weight. “Airplane Mode” grimly detests those who claim to be on the same page leading into the dramatic “Conflict Resolution” talking about cops ducking the feds.

Meanwhile on “Red Pesto”, we have Conway the Machine tagging along over some eerie boom bap production addressing self-trust just before “Valedictorians” comes through with a rugged ode to Queens. “Chicken Chinese” takes it back to the basement talking about how his boys had the weight & everyone else has to wait, but then “Nigerian Vegetables” brings some organs to the fold to brag that he moves officially.

Westside Gunn comes into the picture for “Trigger Point Therapy” works in a glistening boom bap instrumental about how “good crack come back like the #9” prior to switching into the “Eric B.” beat off my favorite HWHmixtape Hitler Wears Hermes II for the final verse. “Raspberry Crush” has this incredibly ghostly sample through as Meyhem & Hologram deliver some battle taps while “Lavish Vision” has a more demented sound to it belittling a rival block.

Continuing from there, “Oversized Luggage” with Elcamino throws some strings into the fold talking about how they still wildin’ while the song “Top Grain Leather” with Flee Lord shoots for a classier aesthetic to rep for the real ones. The penultimate “G Talk” is a jazzy ode to street terminology & “Ridin’ Dirty” ends the album with a vocal loop with the title saying it all as far as subject matter goes.

Coming from someone who’s been listening to this dude since high school, he just gave us one of his best albums of his career with Black Vladimir. Daringer’s signature style production goes hand-in-hand with the gritty gangsta rap that Meyhem & all the features vividly paint in their own ways.