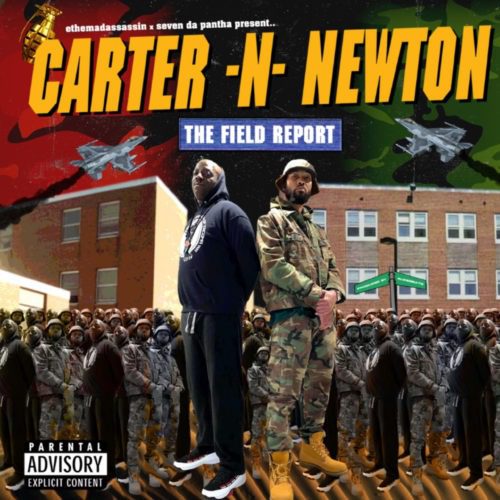 Carter-N-Newton is a newly formed West Coast duo consisting of Los Angeles’ own ethemadassassin & Tacoma emcee Seven da Pantha. They first got together on “Claimed Throne” off the Dior Lansky EP Distortion that came out last thanksgiving, but have decided to band together for a full length debut with with D.R.U.G.S. & Slidebeatz both handling the production end of things throughout it’s half hour run.

After the “What Makes Wolves” intro, the first song “Trying” is a passionate opener about change whereas The American Dream” luxuriously talks about chasing legal checks. “We’re Not the Same” takes a grimier route detailing those who aren’t cut from the same cloth as them & after the “Seize the Moment” interlude, Ricky Vega tags along for the organ-laced “Push the Line” saying the wrong people are watching you.

Meanwhile on “A Better Day”, we have Tay da Crown teaming up with Carter-N-Newton to smoothly display optimism despite dark days just before “Hunger Pains” has a more mystical sound getting in their battle bag. “R.N.E. (Real N***a Energy)” is a rowdier cut bringing you just that & after the “Build” interlude, the song “Give & Go” cinematically asks if people still listen to the streets talking. The penultimate track “Getting Over” is a much more sadder cut on the album talking about life being a gamble & “Greatness” finishes things off with a chipmunk soul sample speaking on their prowesses.

If these guys are gonna continue to put out music together, then I wouldn’t mind it at all because I thought The Field Report is a pretty good listen. I appreciate that the features are kept to a minimum, it’s well-produced & I think there’s more chemistry between both MCs.