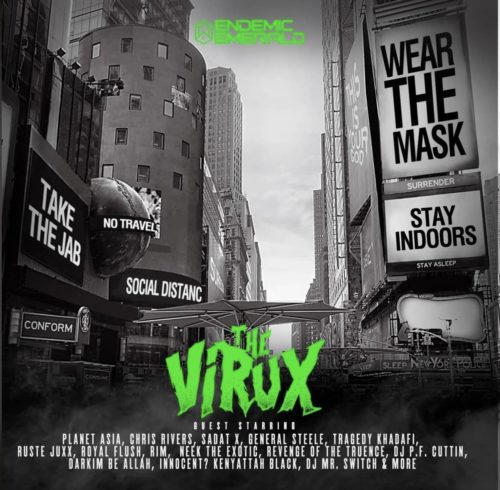 Endemic Emerald is a 42 year old producer from New York City who started putting out projects of his own in 2009 with the full-length debut Terminal Illness. This was followed up with a sequel record nearly half a decade later & now coming fresh off fully producing Darkim Be Allah’s sophomore effort Antediluvian King last fall, Endemic is enlisting a lengthy list of underground MCs for his 3rd album, “The Virux” available on NoCureRecords.com.

After the titular intro, the first song “Militant Ethos” by Royal Flush, Ruste Juxx, Steele, Tragedy Khadafi sets the album off fantastically with a glistening boom bap instrumental comparing themselves to that of a militia whereas “Champion Sound” by Darkim Be Allah & Kasim Allah weaves in some organ melodies talking about being victorious. “The Awakening” by FRD FRLN, Lucky Tatt & Planet Asia sonically picks up where previous cut left off getting spiritual leading into the symphonic “Across 110th Street” by Revenge of the Truence flexing their lyrical abilities.

Meanwhile on “Critical Mass”, we have Rim alongside Innocent & Foul Monday over some more organ loops declaring themselves as that real hardcore just before “Actual Science” by Planet Asia, Sadat X & Darkim Be Allah is chockfull of insightful lyricism on top of some classy production. “They Live” by Chris Rivers & Revenge of the Truence goes into a more eerier direction paying homage to the Rowdy Roddy Piper film of the same name.

The song “Battle Zone” by Ruste Juxx, Skanks & Supreme goes back into boom bap turf with some keyboards causing ruckus lyrically while the penultimate track “Yesterday’s Tomorrow by Innocent, Mic Handz & Dready Kruger weaves in a chipmunk soul sample paying homage to the fallen icons of our culture. “The Struggle” by Neek the Exotic & Darkim Be Allah is then a touching closer talking about making a respective hustle.

Coming away from this, I think it could very well be Endemic Emerald’s best solo outing thus far. I think the whole bioweapon concept is very well thought out & despite a few lackluster performances, the MCs manage to do their thing on the mic.