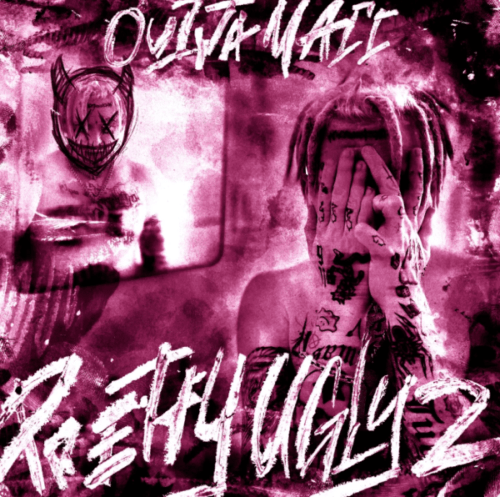 Ouija Macc is a 36 year old rapper from Las Vegas, Nevada who I’ve covered multiple times up to this point. In 2017, the Insane Clown Posse signed him to Psychopathic Records shortly after putting out his debut EP Trashfire independently. Ouija has since proven himself as one of the most consistent & hard working dudes in the underground by dropping 2 full-length albums, 2 greatest hits compilations, 5 mixtapes & 4 EPs all in the span of 4 years. This year itself he formed his very own sub-label Chapter 17 Records as well as joining forces with Baby E for We Never Forgot & following it up on his own by releasing Dirtbag on his own a couple months later but with his born day passing earlier this month, he & longtime collaborator Devereaux are getting back together for his 6th mixtape.

“Get a Life” sets off the tape by demonically calling out those dismissing his talents whereas “Bag Dad” with K1LLWH1TEY bombastic encourages to chase that paper. “Origami” vibrantly talks about folding money like such just before “That’s Wet” incorporates a sitar using the title in the form of a few different metaphors.

Meanwhile on “Bad Company”, we have SmrtDeath joining Ouija to cloudily tell a shawty that wants to swerve with them that they’re unsavory leading into the cavernous “Homonym” hazily talking about bringing them commas in & the DJ scratches during the last minute or so blew my wig back. “Giddy U” atmospherically gets on some romantic shit, but then “Nothing Else” has a more peaceful tone instrumentally as Ouija talks about being put here to ride or die.

It’s really cool to hear the beat on “Ever Since” continuously layering itself as it goes on looking back on his past whereas “Let Me Rot” subduedly talks about decomposing at the top. “Feelin’ Nothing” has a bit of an ambient trap vibe speaking on being apathetic when he steps out the chamber just before the guitar driven “Quiet Game” talks about keeping the flame lit & not having to say shit.

“Juggalord” is the only song that Devereaux didn’t produce yet it almost has a Three 6 Mafia feeling down to the hook as Ouija rightfully reminds that he’s never been a bitch & “It’s a Go” steelily talks about being down for all maneuvers. The song “Say It Much” is another guitar/trap ballad expressing his love for his lady while the penultimate track “Make Me Laugh” viciously disses those who’re scared of him blowing up. The closer “Pain Away” finishes the tape with a grungy weed anthem.

As much as I enjoyed the first PRETTY/UGLY, I genuinely think this sequel is even better. I like how the features are more toned down in comparison to the predecessor but most importantly; Ouija & Devereaux are basically the wicked shit’s equivalent to Future & Metro Boomin’ at this point because both of them take their songwriting & production game to a higher level every time they get together.