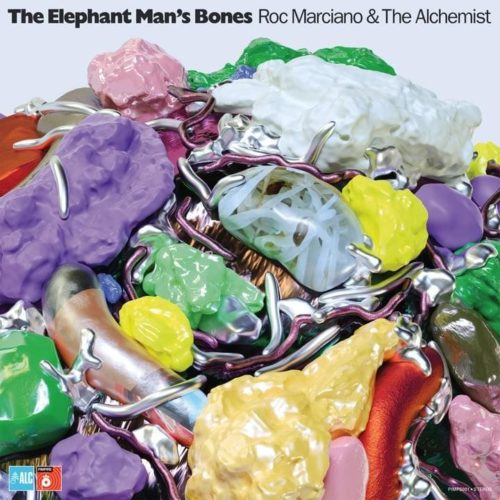 This is the 10th full-length album from Long Island emcee/producer Roc Marciano. Starting out in the very late 90’s as a member of the Flipmode Squad, he then went solo in 2008 to drop classic albums that would pave the way for Griselda like Marcberg & Reloaded. But after focusing on producing projects for other artists recently like Flee Lord & Bronze Nazareth following Mt. Marci a couple years ago, Marci’s enlisting The Alchemist to fully produce his return to the mic: The Elephant Man’s Bones.

“Rubber Band Grip” is a spaciously suspenseful opener talking about having the pump on him whereas the Action Bronson-assisted “Daddy Kane” works in synths to deliver some coke taps.“Deja Vu” takes a more drumless route with it’s bare piano instrumental confessing he had a breakthrough, but then “Quantum Leap” has some jazzy undertones to it talking about popping your bubble if you try him & the bag he’s in now being different.

Meanwhile on the title track, we have Marci brings back the luxurious keyboards providing food for the spirit just before “Bubble Bath” has a more glistening yet dusty quality to it talking about being rich for real. “Liquid Coke” shoots for a more symphonic aesthetic saying that’s what he’ll leave when he slits ya throat leading into Boldy James tagging along for “Trillion Cut” getting in their hustle bag on top of a flute & some pianos.

“The Horns of Abraxas” however has these chilling organ harmonies throughout declaring this as the zeitgeist sandwiched in the middle of a great spoken word intro/outro from the O.G. himself Ice-T while “JJ Flash” returns to soulful territory spitting that kingpin shit. “Zig Zag Zig” is a dramatic boom bap ballad about how great his life is & your’s isn’t while because you get no pussy while “Stigmata” takes it back to the soul samples as Marci gives free game.

Following that, the sinister” Zip Guns” with Knowledge the Pirate intimidatingly paints some vivid gangsta rap imagery while the song “Think Big” has a more summery vibe to it talking about taking destiny in his own hands. The penultimate track “Macaroni” returns to a synth-based sound encouraging his competition to hang up the mic & get a job with “Momma Love” sends it off with fireworks as Marci hops on top of a on operatic loop putting it all on Ma Dukes.

From the moment I first heard “Flash Gordon” alongside “Pistolier” & “Paradise Pimps” during my sophomore year of high school a decade ago, I’ve been screaming for Marci & Uncle Al to do an album together. Now that it’s here, it’s the masterpiece that I could’ve ever dreamed from them. There is not a single moment from the beginning of The Elephant Man’s Bones to the end that I genuinely dislike from the smooth & witty gangsta rap lyricism from the New York veteran to the perfectly crafted production pulling from drumless, boom bap & jazz rap.