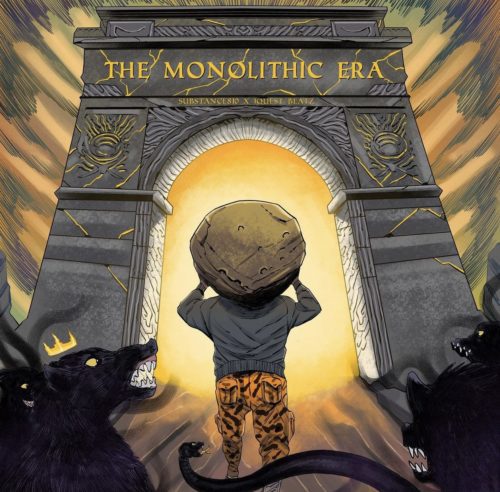 Substance810 is an MC/producer from Port Huron, Michigan who came up in ‘06 off his debut The Definition under his original moniker Tekneek. He’s since gone on to build up an impressive catalog for himself whether it be the sequel The Definition Of…or the Hobgoblin-produced The Hanging Gardens & more recently the Chuck Chan-produced Desolate Lands this past spring. But with fall approaching, Substance has decided to recruit JQuest Beatz for his 11th album.

After the “Exordium” intro, the first song “Don’t Bite the Hand” is an eerie opener basically advising to never act ungrateful towards him prior to ethemadassassin & K. Burns tagging along for the dusty “Monolithic” talking about being indivisible. “Triumphant” works in some horns describing his rise to prominence whereas “Ancient Sand” laces an entrancing vocal loop asking if you know the traces that make a man.

Meanwhile on “Cross the Line”, we have P.U.R.E. tagging along to help Substance deliver a seething jab at those who step over their boundaries leading into “Time Zones” returning to the boom bap talking about being in another world. “Flaming Chariots” weaves a flute into the fold explaining that the loudest be the scariest in this battle, but then “Solidarity” with John Creasy, Big Trip & Josiah the Gift comes through with an impassioned Umbrella posse cut.

“Sexxx Pistol” shoots for a more foreboding aesthetic delivering some flawless wordplay using sexual & weapon metaphors while the guitar-laced “Concierge’s in Negril” getting in his storytelling bag about a shorty named Natalie. The song “Foundational” with Allah Supreme & Sunez Allah sees the trio over a rich beat talking about never starving while the penultimate track “Raw Materials” with Body Bag Ben brings back the horns displaying some cutthroat lyricism. “Precious Medals” though is a jazzy yet emotional closer talking about the old days.

Of the 2 albums that Substance has dropped this year, I think The Monolithic Era is a more personal experience than Desolate Lands was back in the spring. He lets the listeners in a journey through his mind as to how he got his name & JQuest Beatz’ sound compliments his lyrical style well in my personal opinion.