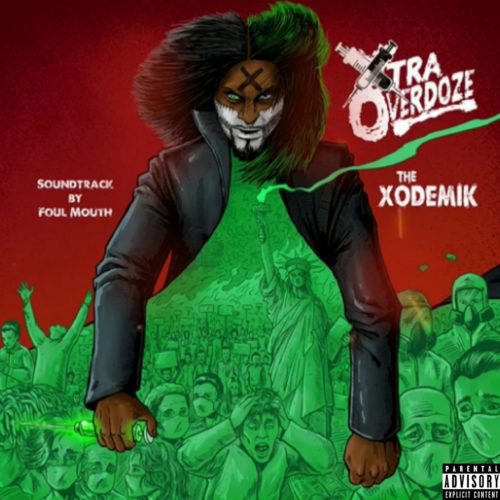 Xtra Overdoze is a 29 year old MC from The Bronx, New York breaking out a few years ago off his first 2 mixtape W.T.F.I.X.O.? (Who the Fuck is Xtra Overdoze?) & Goody Bag. This was followed up with the full-length debut Viral Injection in March of 2019 but after 2 & a half years with much anticipation, he’s tapping in one of my favorite producers within the last decade Foul Mouth to lace his sophomore album from front to back.

After the fiery “Beginning” intro, the first song “This is It” demonically let’s listeners know of his return whereas “66Sick Shit” takes a turn into trap territory talking his shit. “Lose Control” is a more rock centered cut encouraging the crowd to get crazy just before “The Plague” aggressively looks for the smoke.

Meanwhile on “Want It All”, we get a chaotic club banger on all fronts leading into the spooky trap cut “Runaway” saying he’s fucking a crazy bitch. “Inexorable” ruggedly depicts how ruthless he is, but “Reality” works in some creepy keyboard melodies saying everybody’s looking for something.

“Forever More” takes things into boom bap territory saying this music is so inviting whereas “What’cha Came For” is an aggressive sex cut. “Unordinary” hectically describes how this one bitch ain’t normal just before “Middle Fingers Up” is a dusty “fuck you” anthem.

Isaac Castor tags along for the EDM-inspired “Choose Death” getting murderous while the penultimate track “Horror Party” gets on that wicked shit & the trap instrumental is just off the wall. “The End is Near” finishes the album letting the world know this is for the record.

Personally, I think this is XO’s best work to date. I feel like his songwriting has stepped up tremendously in comparison to Viral Injection, but then Foul Mouth’s production is absolutely incredible in every sense of the word.