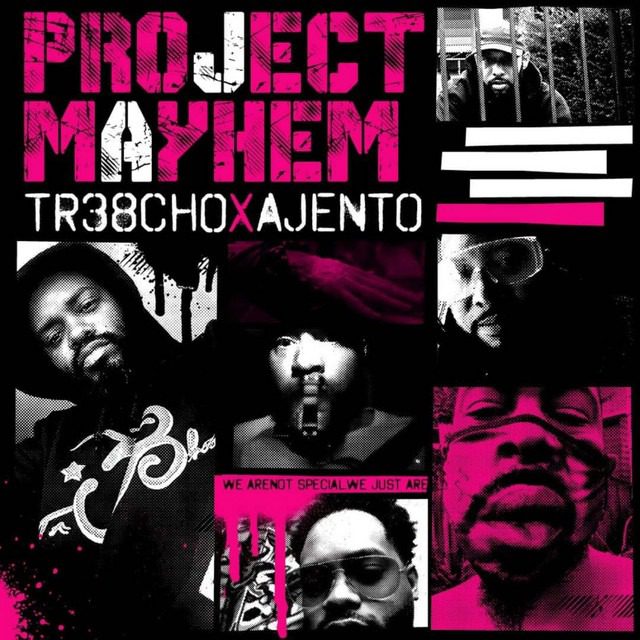 Buffalo MC’s Tr38cho and AjentO trade jabs in their new collaborative single “Coup De Grace”  which serves as the lead single from the forthcoming LP Project Mayhem.  Backed by a vibrant and hard-hitting punk backdrop, the duo brings nothing but pure lyricism to the forefront with their off-kilter battle-ready performance that keeps listeners locked in.

Buffalo, New York– Emcee, vocalist, poet and producer, Tr38cho (pronounced /trā/ –oh-choh) spent most of his adolescence attending multiple arts and sports programs throughout the city of Buffalo. By the time he hit is preteens Tr38cho would take to skateboarding, swimming, playing basketball, graffitti, and ciphering in parks to gain recognition in local neighborhoods, mostly on the city’s east side. Between a long stint of bouncing between Buffalo, New York City and Virginia Beach, he would meet soon-to-be emcee/producer sparKmatiK at an Eyedea & Abilities concert in the summer of 2010.

Both Tr38cho and sparKmatiK were able to cipher and talk to Eyedea after the show where he would inspire both to pursue music as a career. In 2013, After finally resettling in Buffalo, Tr38cho and sparKmatiK put together a collection of songs as a duo, naming themselves The Greys. This would draw the attention of Nicholas Morgan Anderson, who would later decide to finance the project and release it as Project Grey Matter under the newly founded Dead Trash Mob Records, LLC. In 2015 Tr38cho would release his full length solo album titled Trécubessence, an all too hauntingly adventurous tribute toThe 27 Club almost entirely produced by sparKmatiK, which was also released under Dead Trash Mob. Trécubessence established a cult following internationally among fans of Alternative Hip Hop and Punk after both Tr38cho and sparKmatiK went on to open for such acts as Cage, MC Chris, P.O.S, Sage Francis, Dope Knife and Busdriver.

In 2016, during the filming of Filthy Fishy Dreams of Persephone, Tr38cho and sparKmatiK alongside OLMEC and Ideal, two other local emcees featured in the video, joked about forming a punk minded rap group that would soon formalize under the name Rap And Destroy. Rap And Destroy would grow to have a nationwide cult-following with their 2016 self-titled release and even furthermore with their 2017 release titled R.A.D AdVice, which featured production from local producer/emcee VISEVERSA. Both releases were followed with a self-booked tour. The first consisted of D.I.Y house venues and dive bars in Philadelphia, Trenton, New Jersey, Cleveland and Huntington, West Virginia. On their second run they returned to Trenton and Philly, rounded out with a handful of gigs in Brooklyn.

Currently, Tr38cho works as both an emcee and/or a singer in numerous punk projects including Old City as lead vocalist. In addition to this, he is currently collaborating with Buffalo Hip Hop legend Ajent O on a project where the two equally share production credits. Tr38cho has also finished production on a score for a horror film due to be released in Fall of 2020.

Keep up with Ajent O| Soundcloud